Kate and I went to London this weekend… we live in SW England, so London is really far away to us. I didn’t want to take any paperbacks with me because I knew I’d have to carry them around and I’d be buying a bazillion new books while I was there anyway.

I had 25 pages left of Cujo when I was picked up to go to the train station on Saturday morning at 5am, nooooooooo! So as soon as I got home this eve, I put my pj’s on and finished it, before doing anything else… here’s my review:

I’ve read this before. But the first time I was much younger. I didn’t appreciate the horror as I do now. I guess now I can see that this could happen, that’s what makes this book so scary. It could happen to anyone. A lot of Stephen King is fantasy and suspending belief. Cujo is chillingly realistic and that is what makes this story such a chiller!

Cujo is a massive Saint Bernard, but a he’s big gentle giant. He loves kids. He plays with them, and is a good dog. One day Cujo gets bitten by a bat and gets infected with rabies. The rabid dog goes on the rampage in a small, backward town in the hottest summer in recent history.

Joe and Charity Camber, and their son Brett, are Cujo’s masters. We see the loving relationship between Brett and his dog, and we also get to see that the dog loves the boy too. The story is written from the dogs perspective as well as the other characters. Letting us know what Cujo thinks/feels/sees makes this story heartbreaking, as well as scary. We know he’s a good dog. It’s not his fault.

Vic and Donna Trenton, and their son Tad, are the other family in this story. The ones unfortunate enough to cross paths with the Camber’s rabid beast.

I liked Vic and Tad. I found Charity, Joe, Brett and Donna to be annoying and not that likeable. This mix of reactions to the main protagonists makes it a good read and one that is true to life – we can’t like everyone. The secondary characters of Roger and Steve were good and useful to the story.

The story does come across quite dated. A lot of references to old things, and old sayings. But it’s an old story, so..?!

Cujo has been reviewed so many times, and there isn’t much more to say other than that it is overall a good read, one I would recommend. 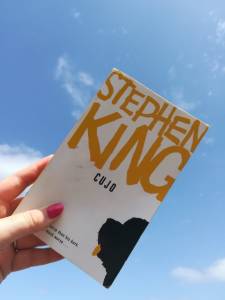 Thanks for 400! 🎉🎉
🍾 Book Review 🍾
Happy Christmas Eve Everyone!!!
Happy Thursday Everyone…. It’s nearly the weekend!
Book Review
❄️ Book Review ❄️
The Tomluc Tree by @trionaharrisauthor
ARROWOOD AND THE MEETING HOUSE MURDERS by Mick Finlay
Look at this beautiful children's book that Anne @tinyhorsebooks has sent us.
Loading Comments...
%d bloggers like this: