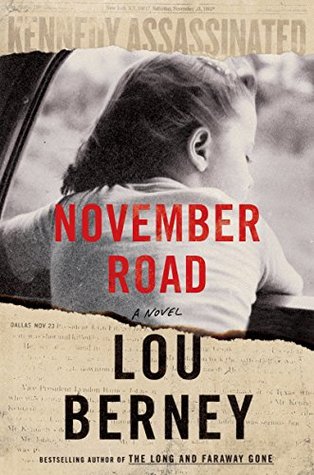 Set against the backdrop of the JFK assassination, this story tells of Frank and Charlotte – two very different people, whose lives cross because of that fateful day in Dallas.

I am English, this book is set in America. We have a Prime Minister, America has a President. I find it fascinating how idolised the president of the United States of America is, or maybe was, not so much now. It isn’t the same nowadays, to my mind. Back then, people believed in their leader, they admired him. When the assassination happened, as described in this book, people openly wept on the streets: man, woman and child alike. I haven’t had that experience, and I don’t think I will, in modern day, and also here in the UK. Political inclinations aside, the profound affect JFK’s death had on Americans at the time, and still to this day, is just unimaginable. So to have this as a backdrop to this story, and the way it is woven in, to sound realistic, was really good.

Frank Guidry works for big mobster boss Carlos. Carlos had Frank drop off the car used in the assassination, in Dallas. After the hit, Carlos needs to tie up lose ends, and ultimately that means Frank. However loyal, and trustworthy Frank has been in the past to his criminal boss, he is still a lose end. So Frank decides to go on the run. On his way, he meets Charlotte.

Charlotte, is a housewife, mother, amateur photographer, alcoholic-enabler. She is married to Dooley, whose drinking is getting out of control. Charlotte decides to pick up and leave Oklahoma, with her two girls and dog in tow. They have slight car troubles, and who should come to their rescue? Of course, the handsome stranger, also going their way.

The juxtaposition of Frank’s gangster lifestyle, with Charlotte’s sweet homebody type existence is just such contrast that you don’t see how they can ever been tied together in to one story. In fact, they read like two separate books. One world where Frank exists with gambling, showgirls and whiskey, and one where Charlotte exists to please her husband and clean the home.

We don’t want to like Frank, I mean, he is a bad guy – he has killed, he was complicit in the JFK affair (well, unknowingly I suppose), and he is only using Charlotte and her family as cover to get him where he wants to be. But yes, we do in a  way start to like Frank. He has that cheeky way about him, that makes you want him to get his happy ending. He’s not asking for much, just not to be knocked off by Carlos.

Charlotte didn’t dwell on the irony. The moral of The Wizard of Oz, of course, the lesson that Dorothy finally learned, was that there’s no place like home.

Charlotte is sweet, but she is very clever and thoughtful and she know what she wants. When she finally finds her voice and realises what she wants, she goes for it, and her reasoning is sound. I liked that she wasn’t a soppy housewife who was moaning about her husband the whole time, or dithering about whether she made the right decision in leaving. She made her decision and is living with it.

But Guidry had been attracted to plenty of women over the years. Never once had it clouded his judgment. Why would this time be any different?

They ultimately get it on and it seems natural and meant to be, when sometimes it can be all too cliche at this point. Especially as he doesn’t fight the feeling of attraction for long.

The sense of the era comes across stunningly, it feels like you could be there in the early 60’s. The detail about Vegas and the small towns each of the characters pass through on their way, is descriptive and interesting. The soundtrack of 50’s and 60’s crooners is great, the secondary characters are all well fleshed out – Seraphine, Ed, Barone, Carlos, Joan and Rosemary.

Barone is another of Carlos’s bad guys, sent to find and kill Frank. He seems to be one step behind the whole way. He is a nasty character. The scenes where he makes a kill, are gruesome, but not gratuitous. He is a bad man, it is his job. He doesn’t seem to kill for fun though. Not sure if this makes him scarier or not?!

Overall this book was really good. It hooked me from the start. I would recommend this in a heartbeat.

(*copy received from Edelweiss in exchange for an honest review*)

Love is what you bake of it.
Old books - must have 👍🏻 or musty 👎🏻
🐑DO ANDROIDS DREAM OF ELECTRIC SHEEP? 🐑 by Philip K Dick.
How has everyones March been so far?
Who’s counting down till the release of A Court of Silver Flames on Tuesday?
Trading Secrets by Rachael Eckles
🥳 New Book Review 🥳
Sunday Plans- I’ve been for my daily walk and now I am freezing, so I am popping my reading jumper on and going back to bed until it’s time to cook Sunday dinner.
Throwback to when we had sunshine!
Back to top
Loading Comments...
Comment
×
%d bloggers like this: