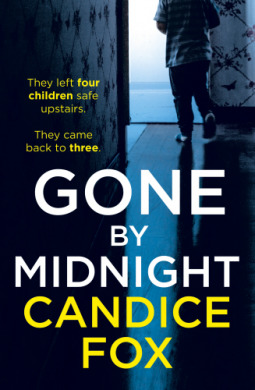 Gone by Midnight, is the third in the Crimson Lake series by Candice Fox.

Thank you to Century publishing for sending me a shiny hardback copy of this to review. And also NetGalley for letting me have a kindle version, all in the same week!

This was fantastic. I have recently read the second in the series, and I thoroughly enjoyed that. So when I knew this was coming, I was very excited.

What is it about? Ted and Amanda run a private investigation firm in Crimson Lake, Australia. They are an odd duo, drawn together because of their shared experiences on the outside of the law. Amanda is a convicted murderer, and Ted is an accused paedophile. They are hired by the mother of a missing boy, to find him and keep her updated on the case, as she believes the police are focusing too much on her and she wants someone out there looking for her son.

Richie went missing from a hotel room, in which he was apparently playing with three of his friends, around midnight on the second night of his holiday. With the 7 parents in close proximity, hourly checks on the boys and secutiy cameras all over the hotel, how could he have just vanished, when Sara goes to check on them at midnight?

We follow Ted and Amanda trying to find the boy and whoever has taken him. There were so many things I loved about this book.

First off I love the main characters. We have had enough time in the previous books to get to know them well, and with each installment we find out something new about them, something else to endear us to them. For all her crazy habits and tics, Amanda is just such a loveable rogue – we all need someone as straight talking as her on our side. In this story we get to see much more of Lillian – Ted’s estranged daughter. We see another, more gentle, sensitive side to Ted in his interactions with her, and the way he feels about her and the whole situation he find himself in, being an accused baddie.

Another of the things I love about this, is the descriptions of the Australian rainforest and the area in which Ted lives. It is so well painted for us, it feels like we are there, in the humid, hot swamps of Cairns.

The pace is just right here, with action all the way through. The ending was superb, nicely tied up. I enjoyed the side story of Joanna and Amanda. And Superfish is just adorable! I want one of him.

Main star of the show, is of course Ted’s family of geese – Mother being the head of the gang. They are great as a back story and make up a lot of Ted’s personality.

I liked the introduction of Laney, and I hope to see more of her in the next installment. Not overly keen on Kelly, she should have stuck by her man. Although, that’s a whole other debate.

Overall, 5 well deserved stars! Excellent, I would recommend to all.