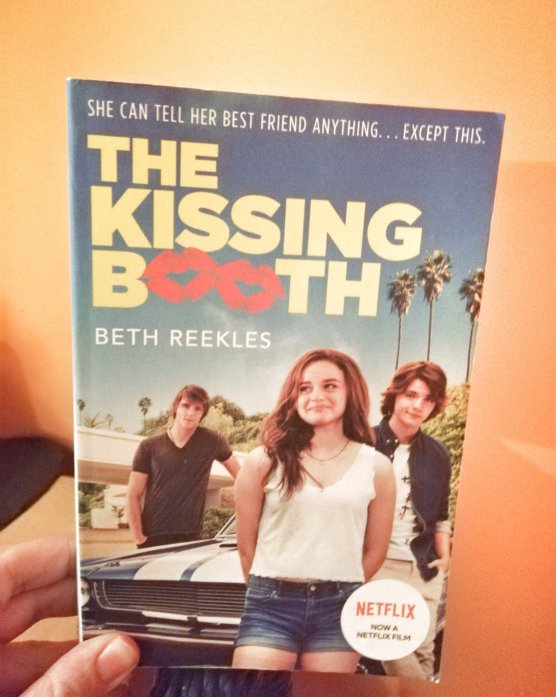 So this one has been on my Netflix queue for a while  but as with all book to tv/film adaptations I prefer to read the book first, I wasn’t supposed to be buying books while in Waterstones the other week but hey ho I was in a bookstore so it was inevitable. While I was in the YA section staring longingly at the hard cover edition of Kingdom of Ash (I already have a normal paperback edition and a signed paperback edition  –  I CAN NOT buy the hardback edition as well)  I saw a trio of teenage girls browsing the books when one of them spotted ‘The Kissing Booth’ and they all fangirled in a ‘OMG, I didn’t know it was a book’ kinda way, so clearly they had seen the movie and their reaction to it was enough for me to pick it up and head to the till (along with a copy of Dumplin’ – my next book to film read).

From what I  had summarised from hearing about this book/ movie I thought it was about a girl who kisses the guy her best friend likes at a kissing booth, okay I was mainly wrong about that. Our female lead Elle has been best friends with Lee ( yes guy Lee not girl Lee) since birth and it is Lee’s older brother Noah (also confusingly called Flynn) who Elle kisses at the kissing booth. Lee doesn’t know that Noah and Elle locked lips at the booth as he was too busy crushing on his new lady love. Of course this is the start of a ‘thing’ between Noah and Elle which to be honest left me feeling a little uncomfortable as though we were about to go into ‘late night Hollyoaks special’ on controlling relationships as it turns out that Noah has been warning guys off Elle, he gets into a fight over her and he starts telling her what to wear. Of course Noah has a bit of  a troubled past, but his past never seems as dark as it is alluded to, in that he seems to like to get into fights.

When him and Elle get together but decide to keep it a secret, Lee goes bonkers when Elle trips and cuts her face as he thinks that Noah has hit her. I did keep thinking that it might be that Lee had a whole unrequited love thing for Elle, or that Lee is actually more troubled than Noah and that he was going to start throwing punches at any moment.

Eventually Lee finds out and it’s so much drama and so melodramatic that I really just wasn’t feeling it, as I felt that Elle and Noah shouldn’t have got together behind Lee’s back, what did they think was going to happen?? Lee also overreacts and Noah disappears so he turns out to be pretty much a waste of space.

By the end of the book I felt that it had really fizzled out and that the ending was very underwhelming. But I was weirdly hooked and couldn’t stop reading the book, however I think it was more in a ‘I can’t believe what I am reading’ way than in a ‘I am loving this, must read more’ kind of way.

I did watch the movie afterwards and it’s no ‘To All The Boys I’ve Loved Before’ which is how I think I am going to judge all Netflix adaptations. The first time I tried to watch it I had to turn it off as it was just so cheesy, the second time I was seriously sleep deprived and I needed something mindless to watch, which it kind of was. I am glad that Noah seemed way less controlling in the movie and that the Queen of Eighties Teen flicks Molly Ringwald was in it but I really don’t think I will watch it again.

The only thing I really came away thinking after reading the book and watching the movie is that I felt old! I am 29 so yes not exactly in the age range for this book or movie really but normally that doesn’t phase me, but with this I kept thinking I was spotting warning signs of dominant controlling/ abusive relationships that the media is always warning us about and I wouldn’t want any girl to think that a guy telling her how to act or what to wear is okay. All I could think is that I wouldn’t want to hand this book to my niece in a few years time for her to idolise Elle or crush on Noah, sorry hun I’ve got a whole bunch of Sarra Manning or Jenny Han books with much more healthy role models for you to read instead.

Have you read the book or watched the film? If so, I would love to know what you made of it all in case I was being over sensitive or harsh?

What would you say if you could talk to your childhood self? What would you change? Delighted to be part of the cover reveal for Steve Jones hilarious and heart-warming debut novel CALL Time! @steveashtonjones #CallTimeBook #coverreveal #bookstagram #ukbookstagrammer #preorder @michaeljbooks
Thanks for 400! 🎉🎉
🍾 Book Review 🍾
Happy Christmas Eve Everyone!!!
Happy Thursday Everyone…. It’s nearly the weekend!
Book Review
❄️ Book Review ❄️
The Tomluc Tree by @trionaharrisauthor
ARROWOOD AND THE MEETING HOUSE MURDERS by Mick Finlay
Loading Comments...
%d bloggers like this: